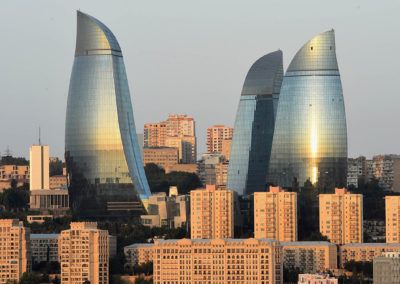 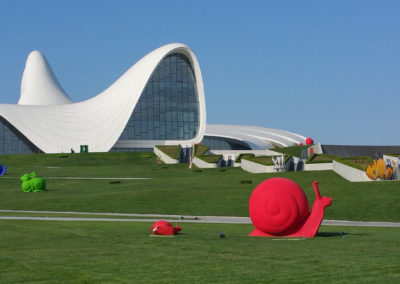 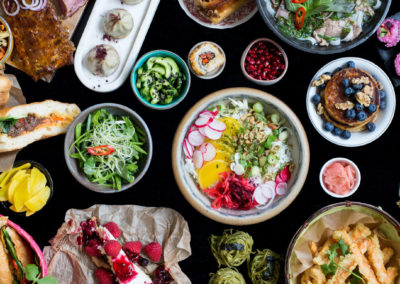 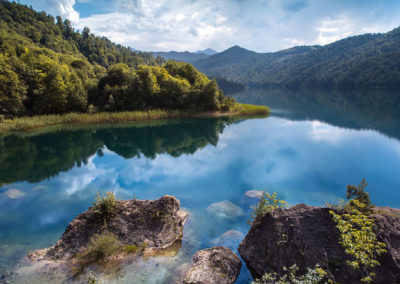 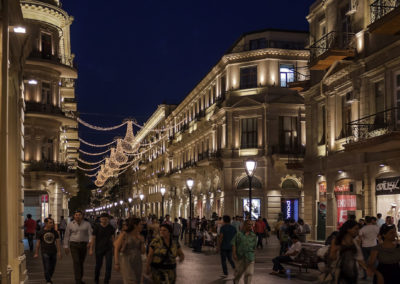 Azerbaijan, one of the worlds’ most beautiful cities. Located at the joint of Europe and Asia, the capital’s name itself is interpreted as “city of winds”
Proceed to check into hotel. After rest, proceed for some local sightseeing – Highland Park, Seaside Park (Baku Boulevard) a promenade that runs
parallel to the seafront. Enjoy a panoramic view of the city, Baku Bay and Seaside National Park. Overnight at hotel, Baku ( D)

Today proceed for Absheron Peninsular Excursion and visit Ateshgah and Yanardagh. Ateshgah is the fire worshipper’s temple located in Surakhany settlement. The temple is one of the many indicators about existence of Zoroastrianism in ancient Azerbaijan; Yanardagh is the ‘burning mountain’ near the Digah settlement. Later in the afternoon,
excursion continues with visit to old Baku city – Icheri Sheher, starting at the entrance to the Twin Castle Gates (Gosha Gala) and continuing through narrow streets. Old City encircles a number of historic-architectural monuments like Maiden Tower, Shirvanshah’s Palace, etc. Overnight at hotel in Baku. (B,D)

Check out of the hotel after breakfast and proceed to Gabala, the ancient capital of Caucasian Albania; which was located in the middle of the 2500-year-old Silk road. Visit Shamakhi en route with an excursion to Seven Tombs – the first residence of Shirvanshahs State and Maraza Diri Baba (living grandfather) Mausoleum; in Shamakhi visit the Grand Mosque. Also visit Lahij village(weather permitting), one of the most ancient human settlements in Azerbaijan and an important centre of craftsmen in the medieval period.
Overnight at hotel in Gabala. (B,D) 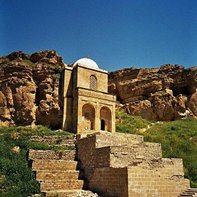 Today after breakfast enjoy a leisurely morning visiting the Qafaz Tufandag Mountain Resort, a summer-winter complex and ride the cableway(optional) through the breathtaking Caucasus Mountain. Later, proceed to Baku. Overnight at hotel in Baku.
(B,D). DayOvernight at hotel in Gabala. (B,D)

Check out of the hotel after breakfast and proceed to Quba Qusar Region, to enjoy the largest national park- Qusar hahdag Mountain resort. . Visit the Tangaalty Canyon, Afurja Waterfall, picturesque Chenlibel Lake. Visit Khinaliq an ancient Caucasian village(Optional /Weather permitting) going back to the Caucasian Albanian period. It is located high up in the mountains of Quba . Khinaliq is among the oldest continuously inhabited places in the
world. Later overnight at hotel in Quba. (B,D) 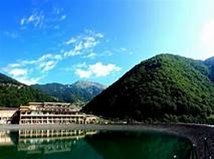 Morning free for shopping till departure to airport for flight home with happy memories. (B,)

Interested in Azerbaijan Tour? Kindly fill the details below and we will get back to you!